Only about 2 weeks after the super rare appearance of manta ray, there was another amazing encounter in Kushimoto, Wakayama Prefecture on September 29. This time, the rare visitor was humpback whale! According to the local dive shop Pole Pole @ Sea, this might have been the first time ever for divers to encounter humpback whale underwater in Kushimoto.

Dive guide of Pole Pole @ Sea was diving in the inner bay when he first saw a black shadow. He thought it was manta ray for a moment, but soon realized it was in fact a whale’s tail! On his second encounter, he could see its whole body, about 10m long. The whale seemed to have been swimming around the bay for some time, appearing in one dive site and another, surprising many divers of the other dive shops also! Such a special experience😊

Kushimoto is one of the best diving areas of Japan, located at the southern tip of Kii Peninsula. There are many interesting dive sites both in the inner bay and open ocean. One of the dive sites in the inner bay, “Ando no Hana”, is open only for limited time. This year, it is open from the end of September to the end of October. Dive site is originally famous for a giant tomato grouper and many spotnape cardinalfish around it. Gigantic xestospongia testudinaria, species of barrel sponge, is also worth seeing. 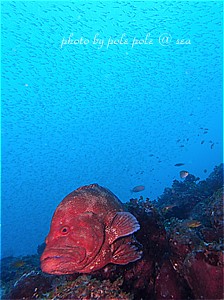