Great Nature Underwater and on Land!!
Diving in IRIOMOTE ISLAND 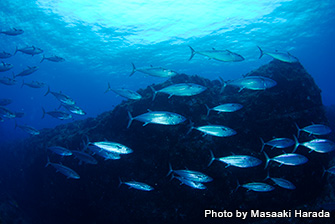 There are about 10 dive sites around Nakano-ogan Island. This one is called “Tenmazaki”

There are many underwater attractions around Iriomote Island. The most popular one is the magnificent underwater scenery around Nakano-ogan Island which looks like rocky mountains with schools of pelagic fish such as dogtooth tuna, bluefin trevally, rainbow runner, etc. Nakano-ogan Island is located 16 km southwest of Iriomote Island. You could even encounter tiger sharks, whale sharks or false killer whales at “San-no-ne” and “Higashi-no-ne”. 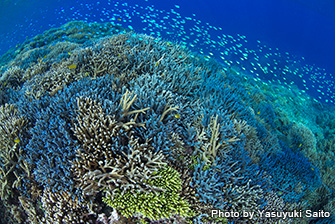 Other attractions of Iriomote Island are its beautiful corals and diverse marine life. Individual diving centers have their own secret dive sites such as untouched coral gardens, places to see rare fish or very popular fish for macro photography such as pajama cardinalfish, mandarin fish and leaf fish. From May to September, few days after each full moon, you will have a chance to see coral spawning during night dives. 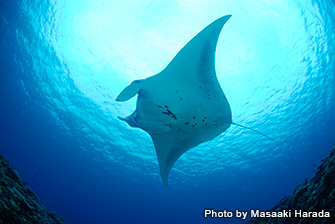 Although most of the manta ray sites are in the southern and eastern sides of the island, there is a chance of seeing manta ray at a dive site around Kanokawa bay, southwest of Iriomote Island. The manta ray season here is from January to early summer. 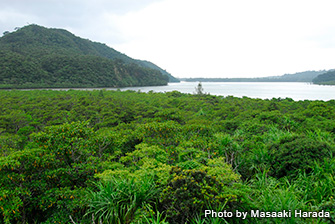 People say that Iriomote Island is the “Galapagos of the East”

About 90 percent of the island is covered by a primeval forest. There are 300 to 400 m high mountains, more than 40 rivers and many waterfalls. Therefore, people are interested in the island not only for diving but also visiting nature on land. You can enjoy trekking in the jungle, kayaking in the rivers or cruising around the mangroves by boat. If you have an additional day, it would be great to visit the neighboring island of Yubu Island by oxcart.

To make things easier to explain, we have divided the ocean around Iriomote Island into 3 areas: the Nakano-ogan Island Area, the North Area and the South to West Area.

Skill level: from intermediate
Maximum depth: 40 m
Currents: sometimes very strong
Distance: 40 min. from Shirahama port
Southwest of Nakano-ogan Island, there is a magnificent underwater rocky formation which looks like a building standing at a depth of 40 m in a strong current. Here you may see many schools of pelagic fish such as dogtooth tuna, giant trevally, big-eye trevally, rainbow runner, barracuda, etc. Also, sometimes whale sharks or hammerhead sharks pass around the rock. 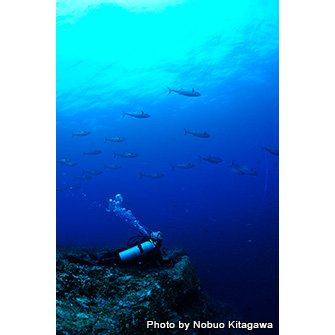 Skill level: from intermediate
Maximum depth: 30 m
Currents: sometimes very strong
Distance: 50 min. from Shirahama port
On the west side of Nakano-ogan Island, there is a giant rock standing from 36 m at the bottom. When the current is strong you will see about 1,000 bluefin trevallies around the rock. Also, there is a good chance that you will see dogtooth tuna, barracuda, and rainbow runner. If you are lucky, you might see a whale shark in summer. 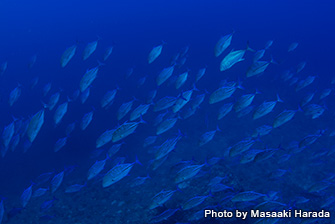 Skill level: from intermediate
Maximum depth: 30 m
Currents: sometimes strong
Distance: 15 min. from Shirahama port
A big vertical rock is standing underwater at a depth of 40 m. Divers wait for the pelagic fish such as dogtooth tuna, barracudas, and rainbow runners pass at the top of this rock. Sometimes, when the current is strong you will see napoleon fish, eagle rays and sharks. 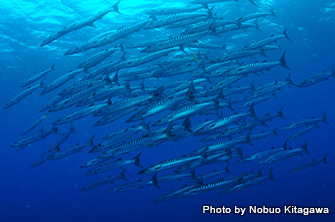 Skill level: all levels
Maximum depth: 10 m
Currents: nearly none
Distance: 10 min. from Shirahama port
The slow currents, the shallow water and the abundant marine life make this area one of the most popular dive sites for macro lens photography. Because of its brackish water, this spot is a good home for many kinds of gobies, pajama cardinalfish and mandarinfish. 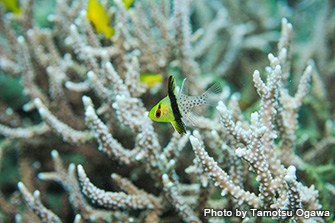 Skill level: from intermediate
Maximum depth: 20 m
Currents: sometimes strong
Distance: 5 min. from Uehara port
Tokakin-no-ne is located between Hatoma Island and Barasu Island, or Barasu-tou (tou means island) only 5 min. from the harbor. The name of this site, Tokakin means dogtooth tuna in Okinawan language. Here you will have a chance to see schools of dogtooth tunas, blackfin barracudas, and rainbow runners. Its intricate terrain is also quite fascinating. 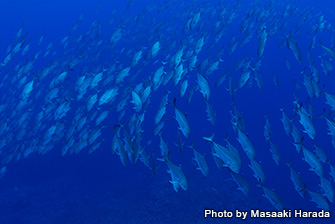 Skill level: all levels
Maximum depth: 27 m
Currents: nearly none
Distance: 5 min. from Uehara port
Barasu Island is an island where coral carcasses are piled up. It is on the east side of Barasu island which is located north of Iriomote Island. You will see schools of fairy basslets and damselfish around the beautiful coral gardens. There are many soft corals in the deep water and you can find many nudibranchs. 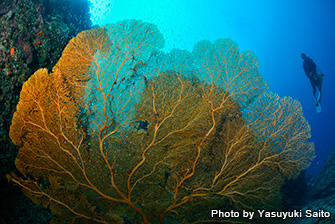 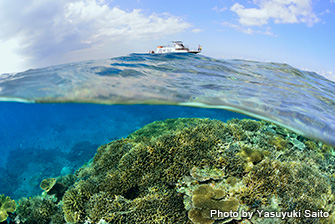 A small cave in “Tenmazaki”, south side of Nakano-ogan Island 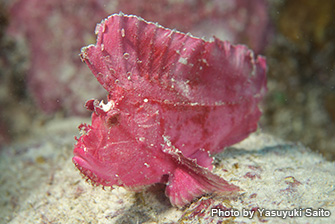 *Please note that not all diving shops on the list have English speaking staff.
*Please choose the diving shops at your own risk. We’re not responsible for any accidents / troubles.

There is only one road, route 215, which runs through half of the island from Toyohara near the south port, Ohara, to Shirahama town in the west, and is also connecting the small town of Uehara in the north. As for transportation, there are not many options here. Taxis and rental cars are few, and you need to make your reservation on Japanese websites. Public buses run 6 times per day. However, you can request a transfer from the harbor to your hotel or pension in advance. If you want to visit the forests and waterfalls, you can ask the staff at you lodging for information. They will refer you to day tours or trekking tours organized by some agencies on the island.

Just a few minutes from Uehara Port to the Uehara area by car.

25 minutes between Uehara and Shirahama by bus.

Usually the diving center or accommodation staff will pick you up at Uehara port. Do not forget to call them before you board the speedboat from Ishigaki port.

A Day of Diving in Iriomote Island

Depending on the dive site, you may spend a whole day on the boat, and do two or three tank dives. Your guide instructor will choose the dive site by taking into consideration the condition of the sea and your skills. Diving centers will prepare your lunch. Most diving centers are located around the ports of Uehara and Shirahama. 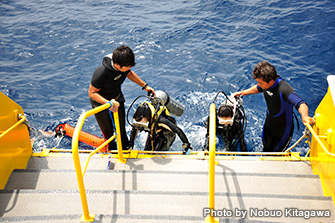 Divers in the strong current at dive site “Higashi-no-ne”

There are various types of accommodations: cottage style accommodation located in the forest, small hotels, Ryokan (＝Japanese style hotel), Minshuku（＝family managed guesthouse）, and B&B guesthouses. Diving centers also have their own guesthouses which are very convenient for divers. The Villa Unarizaki is a Balinese style hotel 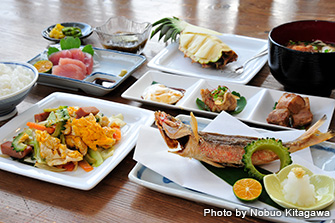 There is no air route for Iriomote Island. You have to fly to Ishigaki Island. Then, you have to go to Ishigaki’s Rito-sanbashi boat terminal which takes 25 minutes by taxi or 45 minutes by bus from the airport. From Ishigaki port, you can access the two harbors of Iriomote Island: Uehara and Ohara. Most diving centers and lodgings are near Uehara port.

About 40 minutes from Ishigaki port by high-speed boat

The distance between Ohara and Uehara port is about 35 km, and takes about an hour by bus. Occasionally, the speedboat to Uehara port may be canceled during winter because of the north wind. It is better to avoid the winter season when visiting. The stands along the street are self-serve. You can buy fresh fruits and vegetables

There are not many souvenir shops on the island. But you will find some small super markets and small boutiques selling T-shirts. Also, there are fruit and vegetable stands along the street in Uehara area. One of the special products of this island is a sweet and tasty pineapple. The pineapple season starts in June. Pineapples are small but delicious in Iriomote Island! You can also buy some special products at Uehara port

When you are injured or sick, you must go to Ishigaki Island.
Emergency phone number in Japan: 119

An Island with Many Tourist Attractions

The readers’ No.1 choice diving area in Japan!

Great Nature Underwater and on Land!!